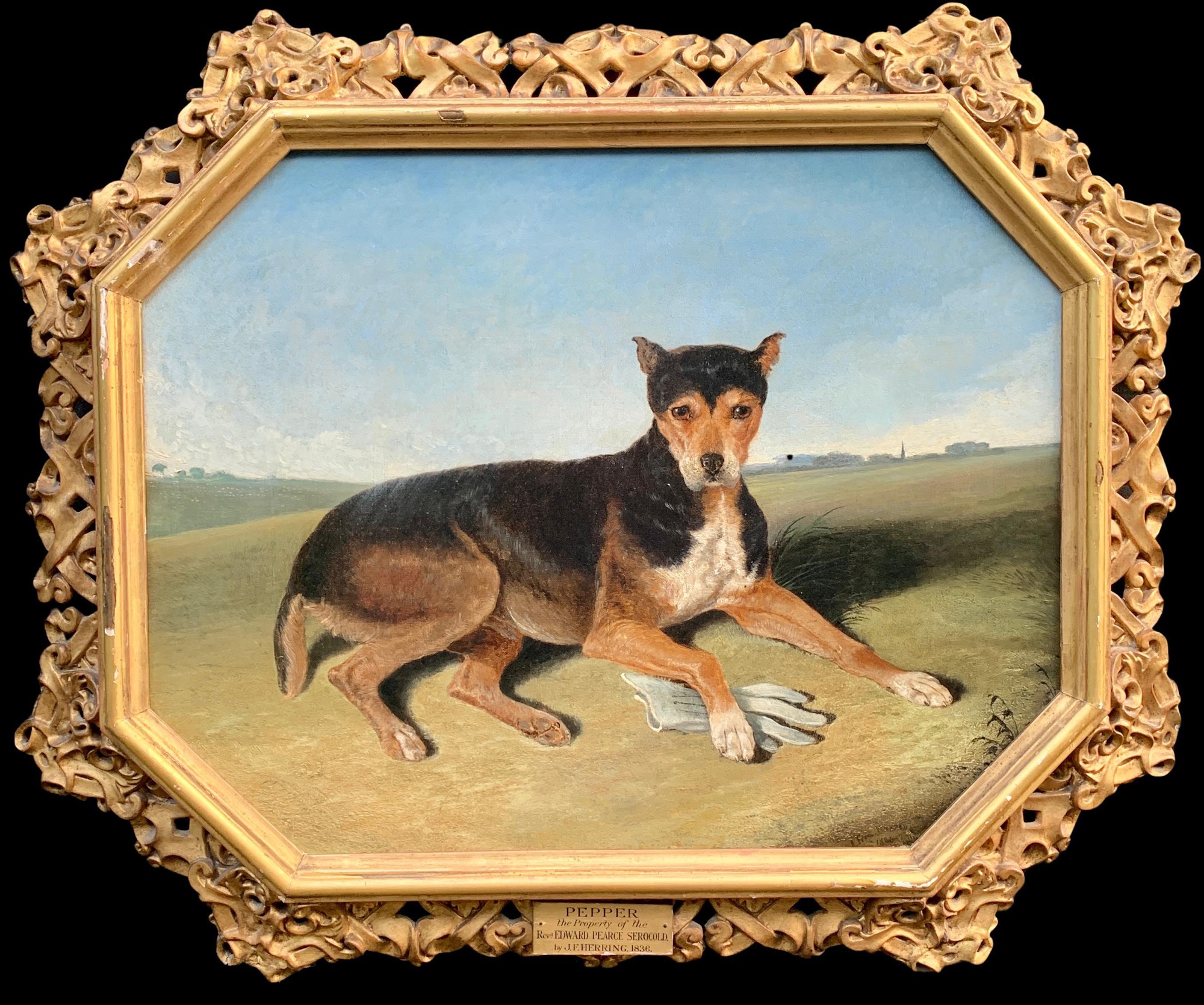 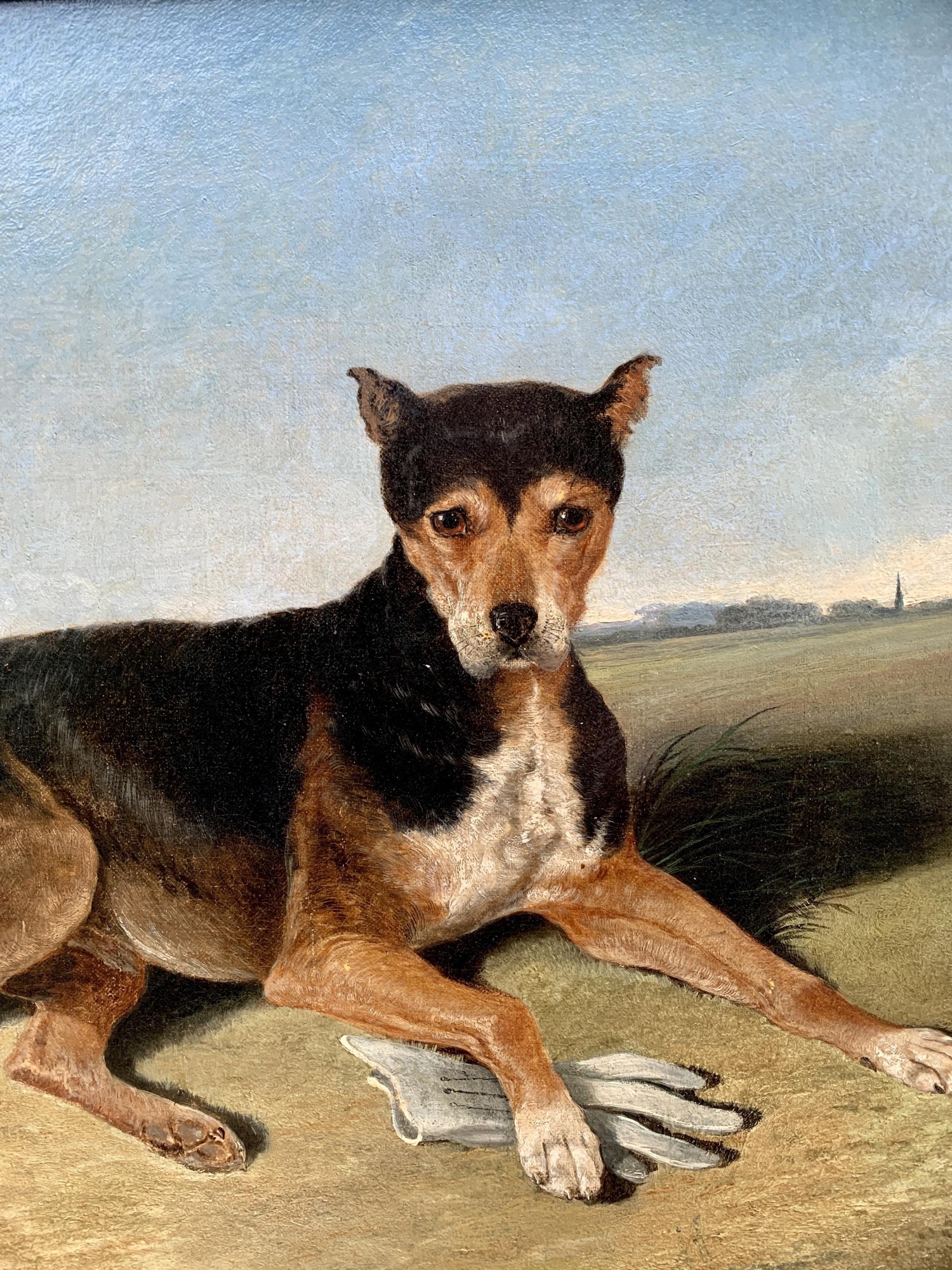 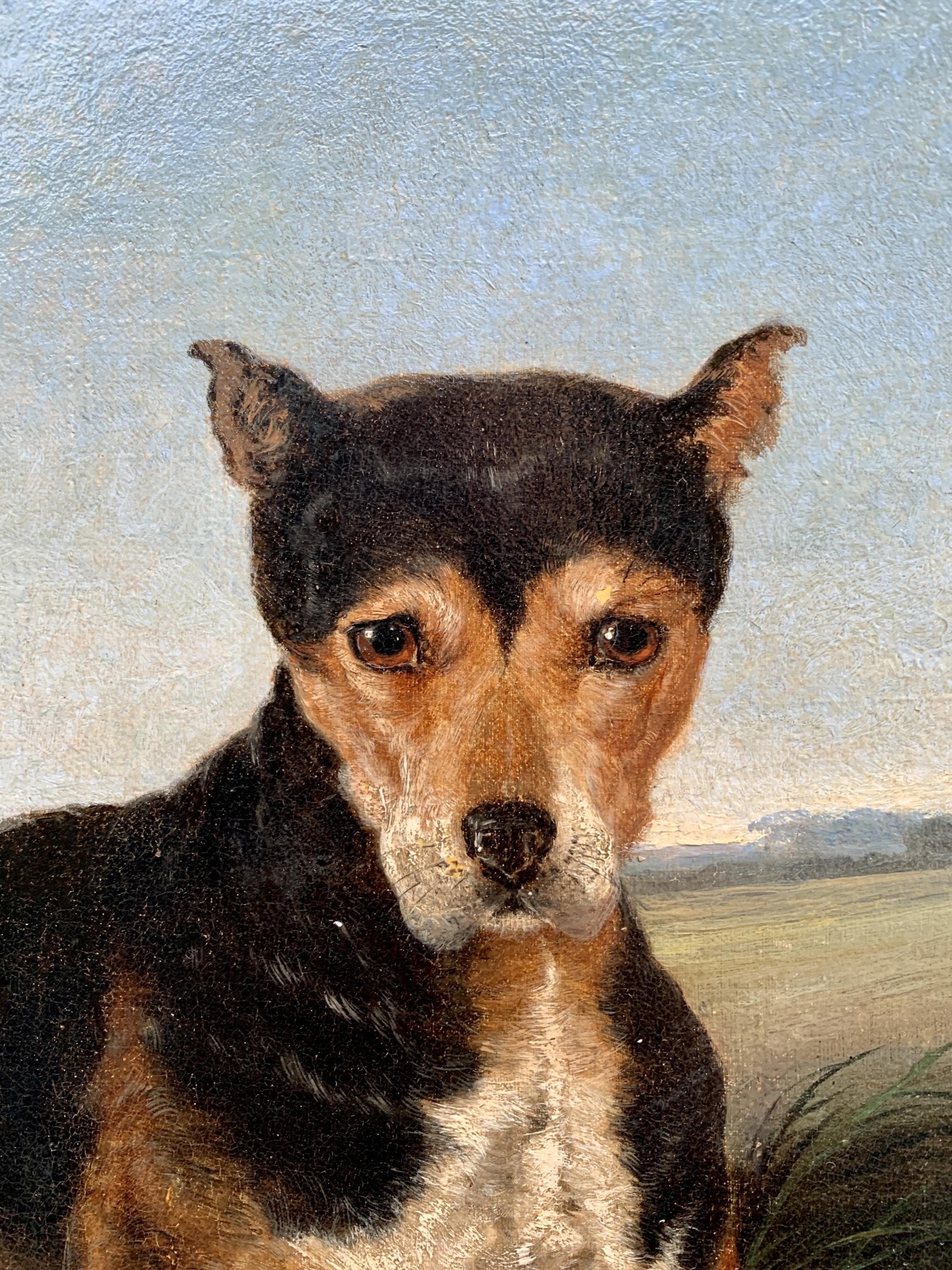 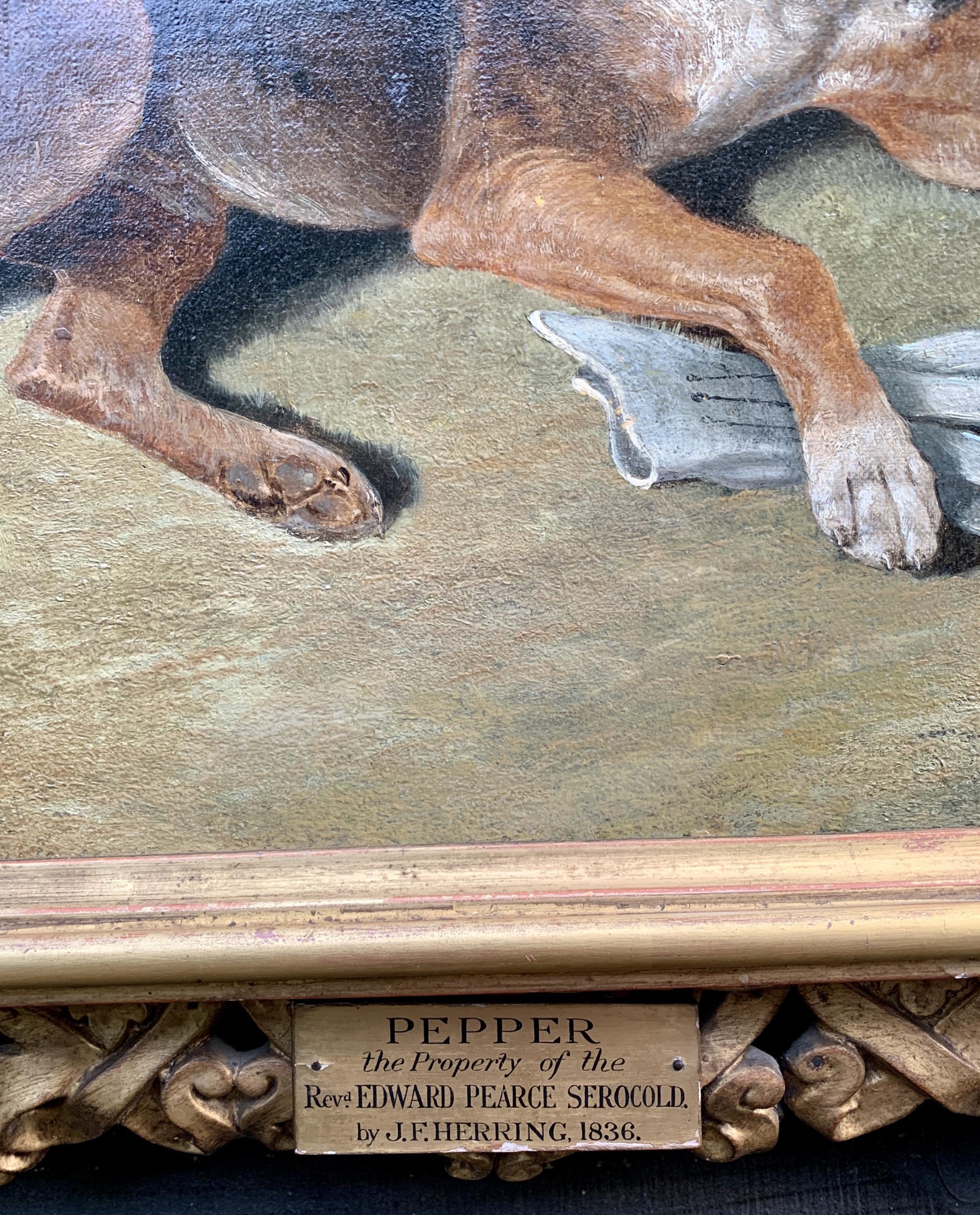 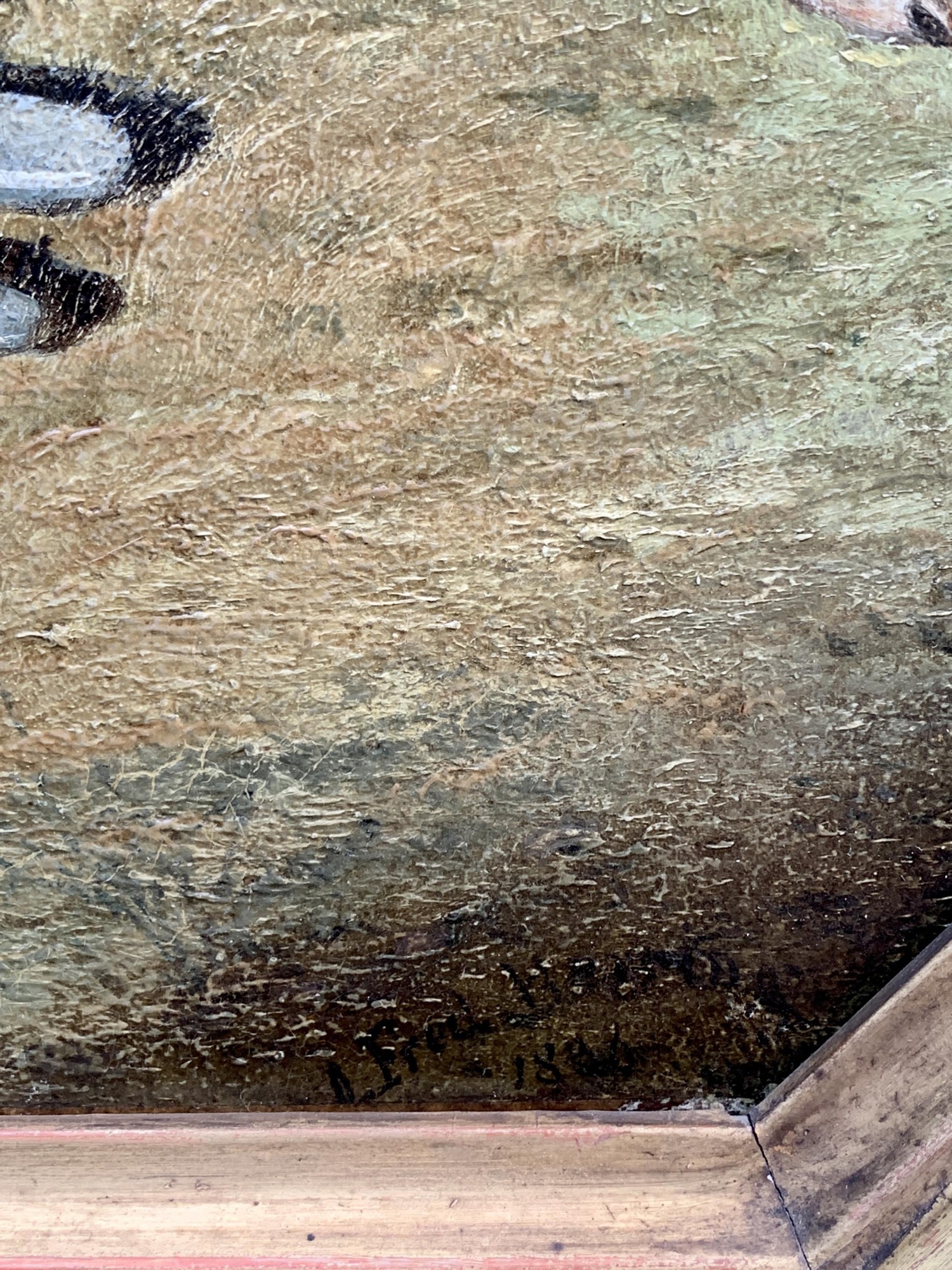 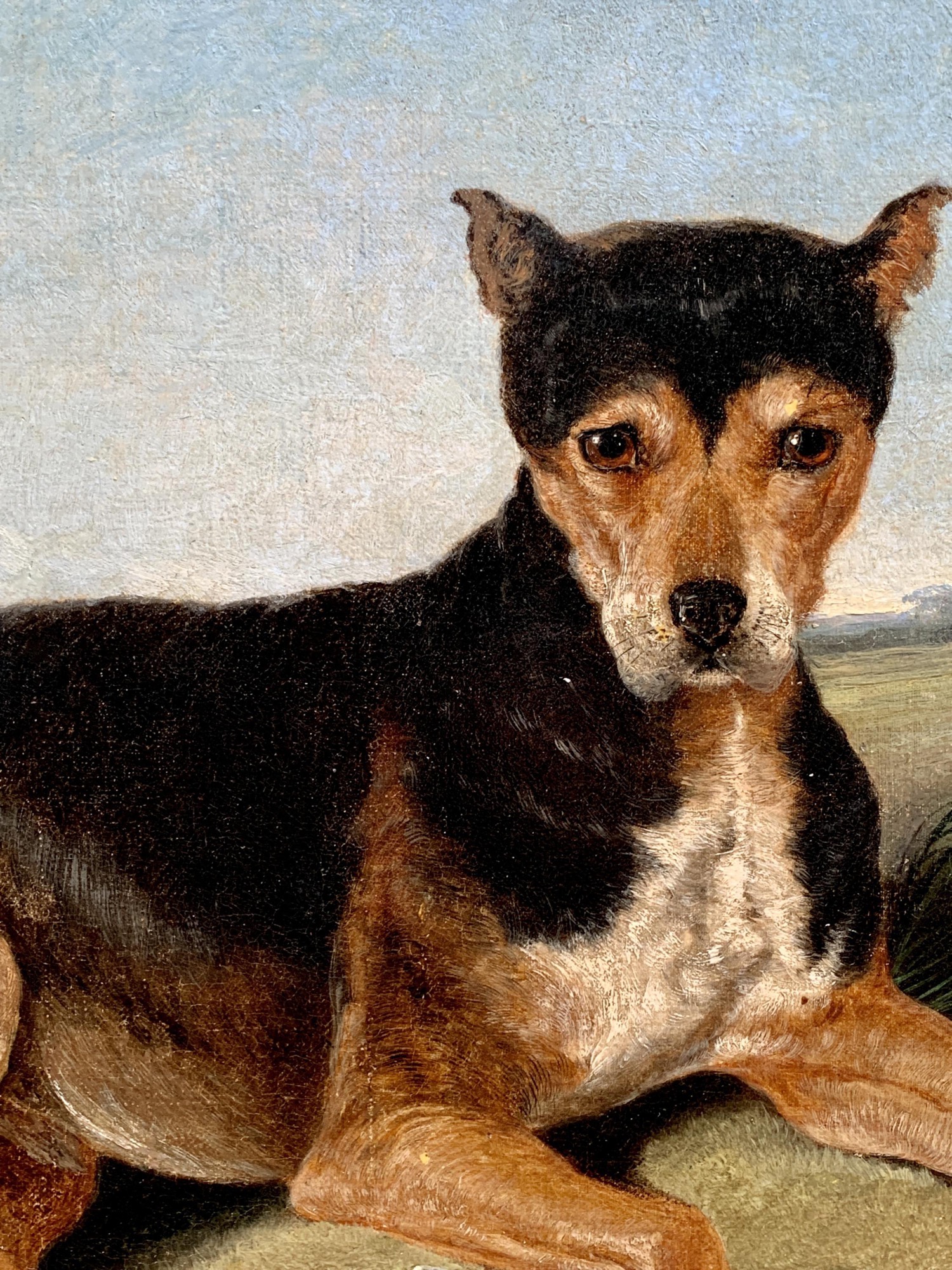 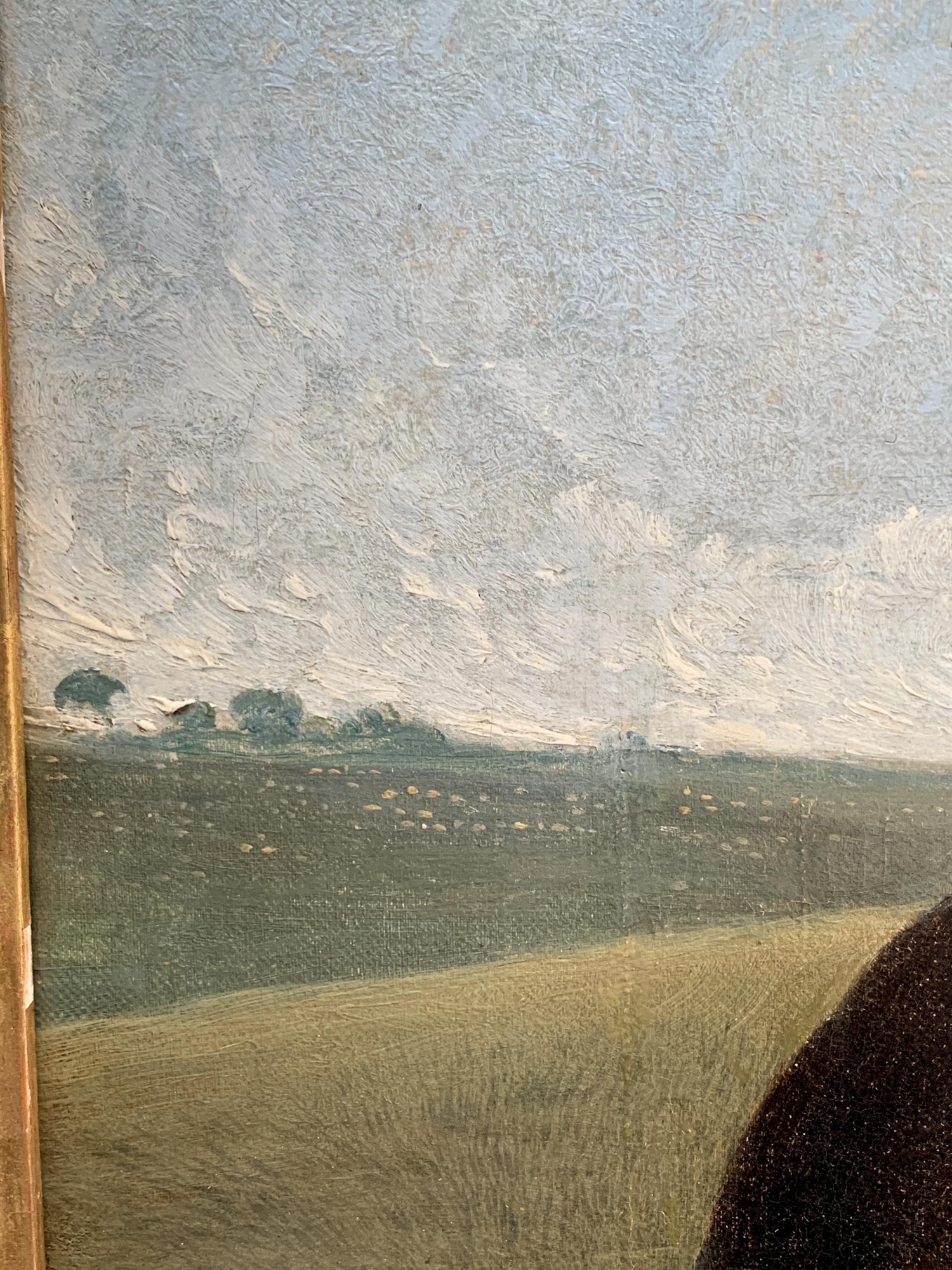 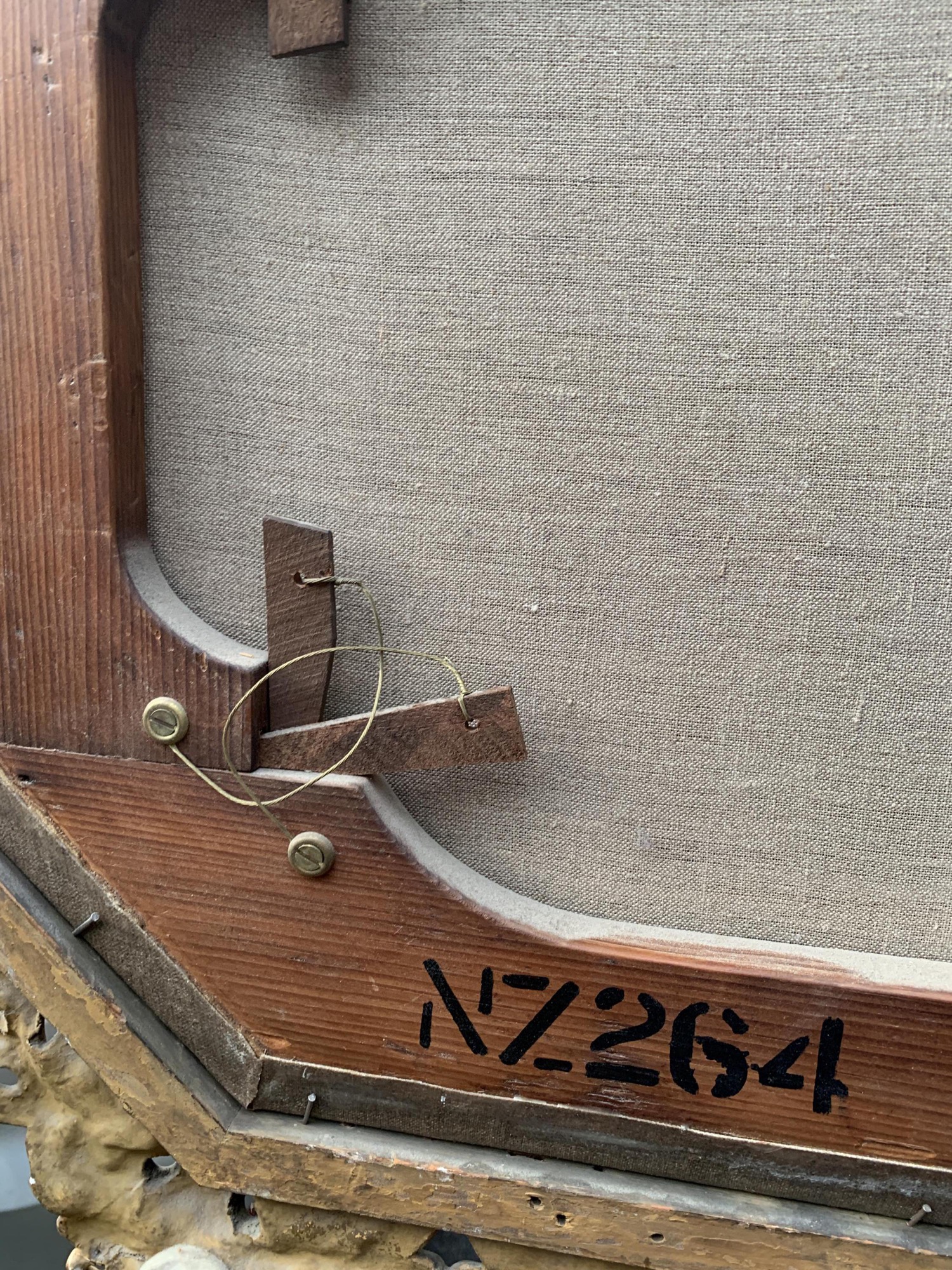 A wonderful portrait of a seated dog, framed in its original frame, signed and dated 1836, oil on canvas.

Artist Bio:
Herring was born on 12 September 1795 in Blackfriars, London, the eldest of nine children of Benjamin Herring (d. 1871) and Sarah Jemima (d. 1831), née Howard. His father was a fringe maker and upholsterer working from Newgate Street in the City of London. The Herring family were of Dutch origin and both his father and grandfather, Jan Frederick, pursued unsuccessful claims to the family property in Curaçao. Herring was never apprenticed to his father and hence ineligible to work in the trade. In September 1814 he took the Royal Leeds Union stage and arrived at Doncaster in time to attend the Great St Leger horse race. Lodging in the town, he came upon a coach builder's finishing shop and helped an employee complete the painting of a horse on one of the coaches. The coachbuilder was impressed and asked him to paint the insignia on the Royal Forrester. On the trial run of the latter, he met the proprietor, Mr Hill, and begged of him the vacant post of coachman to the Nelson. He was given the job and followed the arduous profession for six years, ending up on the box of the prestigious High Flyer plying between York and London. Despite working long hours on the stagecoach, the self-taught Herring nonetheless produced a number of surprisingly competent paintings from at least 1815 onwards. Within a year of arriving in Doncaster Herring had set up house with Ann Harris (1796-1838)- no record of their marriage has been found-and had seen the birth of the first of their children, John Frederick junior. His reputation as a sporting painting grew and he developed a following. Among his early patrons were his contemporary Mr (afterward the Revd) Charles Stanhope, a severe critic whose opinion he dreaded; Mr. Clarke of Barnby Moor, owner of the High Flyer; and Mr. Hawkesworth of Hickleton Hall, whose repeated appeals eventually persuaded him to give more time to painting and who found commissions for him from the Hon. E. Petre, Sir Bellingham Graham, and others. Herring's first exhibit at the Royal Academy was A Dog in 1818; in the following year, he had his drawing of the fractured leg of a racehorse reproduced in the Sporting Magazine.
The year 1825 saw the start of the scheme that made him famous. The Doncaster Gazette arranged for him to paint the winners of St Leger from 1815 onwards. The pictures were then engraved and published first by Messrs Sheardown & Son, owners of the Gazette, and subsequently by S. and J. Fuller, and then by Baily Bros. In all, Herring painted thirty-four winners, thirty-one of which were made into prints. A series of twenty Derby winners followed two years later in 1827. 'As a portrayer of the thoroughbred horse in high condition, he is, and long has been unrivaled' (Memoir). By 1830, his fame as a painter of the turf established, Herring moved to Six Mile Bottom, near Newmarket, the headquarters of racing. He stayed there for three years before departing for Camberwell on the outskirts of London. He now had seven surviving children, three of whom became artists: John Frederick junior, Charles (1828- 1856), and Benjamin (1830-1871). Another Benjamin (1806-1830), Herring's brother, was also an artist. Although apparently successful, Herring was in fact in financial difficulties and was rescued by William Taylor Copeland, the owner of the Spode China Company. Copeland paid off his debts of £500, commissioned a number of paintings, and
used Herring'simages of fox-hunting to decorate the company's wares. Ann, aged forty- two, died in 1838 and Herring moved from Park Street to Cottage Green in the same village. He did not totally abandon racing subjects and in 1840 visited France to paint the racehorses of the duc d'Orléans. Further renown came when he was appointed animal painter to the duchess of Kent (Queen Victoria's mother) and received commissions from Queen Victoria. After twenty years in Camberwell, now married to Sarah Gale (1794-1882/3), he moved to the country. He rented Meopham Park near Tonbridge, Kent. In this idyllic refuge, with outbuildings and 30 acres, he soon installed his favourite model, the white Arab Imaum, once given to Queen Victoria, together with other horses, a miniature pony that wandered around the house eating ginger nuts, ten cows, two pigs, geese, peacocks, fowl, duck, rabbits, and two dogs. This Noah's ark of animals soon featured in his immensely popular genre paintings of the farmyard which were no sooner completed than sold to the London dealers. Herring himself had suffered since his youth from asthma and bronchitis. His health now began to deteriorate and for the last few years of his life he was confined to a wheelchair. He continued to send paintings to the British Institution and the Royal Academy until his death. His work was eagerly sought by the increasingly prosperous middle classes. Engravings of over 350 of his paintings were made in his lifetime. Although suspicious that other artists might steal his ideas and apprehensive of forgers, he did collaborate with a number of his contemporaries- James Pollard, A. F. Rolfe, Henry Bright, Sir Edwin Landseer, C. E. Boutibonne, G. B. Campion, John Faed, W. P. Frith-to produce paintings in which he portrayed the animals and the others the background. He exhibited twenty-two pictures at the Royal Academy, eighty-three at the Society of British Artists, and forty-four at the British Institution. Herring died at his home on 23 September 1865 and was buried at Hildenborough, Kent. Examples of his work are in the Tate collection, Doncaster Museum and Art Gallery, many private collections in the UK and the USA

19th century English portrait of a horse in a stable, called Business

Portrait of a Gray horse in a stable