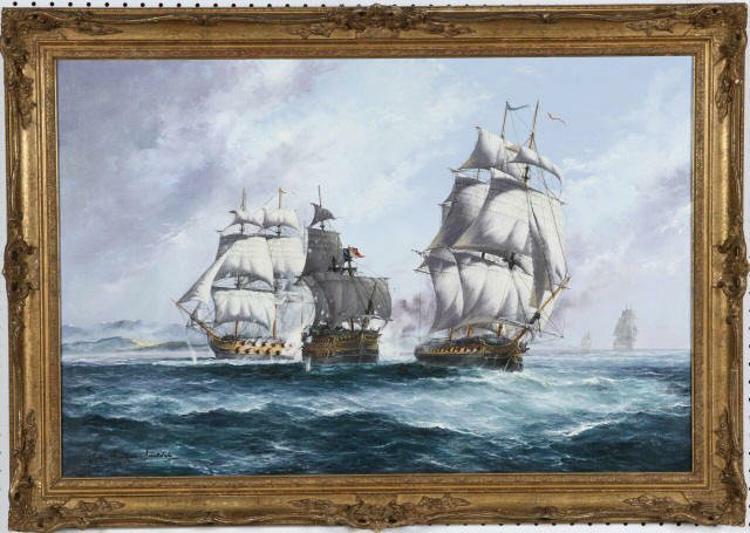 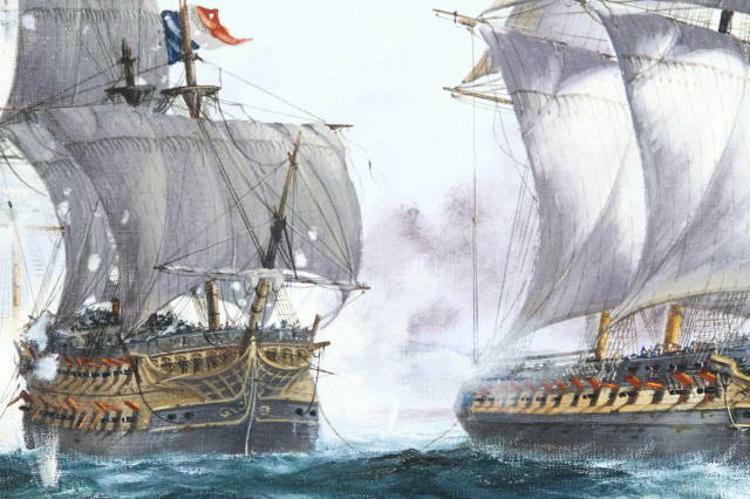 john Bentham-Dinsdale paints the sea and the great ships of the era when "Britannia ruled the waves"with her fleets of Clipper ships and fighting ships whose huge white sails took them over the seas of the World. John loves both the sea and the sailing ships. To ensure that his paintings of ships and sea battles, or an era long gone are accurate down to the smallest detail, he does meticulous research. A Yorkshireman by birth, he professes he really feels at home only on the blustery east coast of England close to the sea he loves and paints so well.

John Bentham-Dinsdale's early years gave no indication he would eventually be an artist, nor that he would excel as a marine painter. His mother was one of the many daughters of J.H. Bentham, a liberal social reformer; his father was a wine merchant. After going to Ashville College, Dinsdale spent five years at the School of Architecture in Leeds, graduating with a Dip. Arch, A.R.I.B.A. During World War II, John was a commissioned officer and pilot in the Royal Air Force.

When the war ended, Dinsdale found work in the theater which had always been his passion. He designed scenery for a number of repertory companies in London's West End and, at one point, ran his own company. An opening in British television came along and in 1956, he was made Assistant Designer with Associated Television in London. Three years later he was head of Design and Construction for Tyne Tees Television in Newcastle. Dinsdale had been painting virtually since he could hold a brush, but it was not until 1965, having moved back to Yorkshire, that he made a full-time commitment to marine painting and historical research.

A founding member of the British Sea Painters Group in 1970, John Bentham-Dinsdale is included in Marine Painting published by Omell and 20th Century British Marine Painters by D. Brooke-Hart. His work has been widely exhibited in Europe, Australia, Canada, the United States and the Far East.

John had his first one-man show in London in 1974. Sir Charles Cayzer bought one of his paintings and presented it to a ship of the Royal Navy, H.M.S. Camperdown. In 1982, a painting by Dinsdale was accepted and hung in the Vancouver Municipal Galleries, and his work was listed and illustrated in the Dictionary of 20th Century Marine Art.

Dinsdale's wide-ranging research has resulted in his painting not only English Clipper ships, but American ones as well. Aided by his extensive marine library, he makes a few preliminary sketches; he then develops his canvases from them. The sea in all its' moods is shown in his paintings. The water has depth and sparkle; it pulses with movement and light under the action of the wind. The ships rest solidly in the water even as they careen under the force of the wing and waves, and they are accurate down to the smallest detail of their rigging and accoutrements. John Bentham-Dinsdale carries on the English tradition of masterly marine painting.

British Marine scene with fishing vessels at the shore line

English 19th century style fishing boats off of the coast